I’ve spent the last two weeks in a frenzy of creating/sewing in order to prepare for a steampunk photoshoot last Friday.

I decided–somewhat foolishly–that I wanted an entire new outfit for the occasion.  So I started with the jacket.

Here’s the pattern I used: 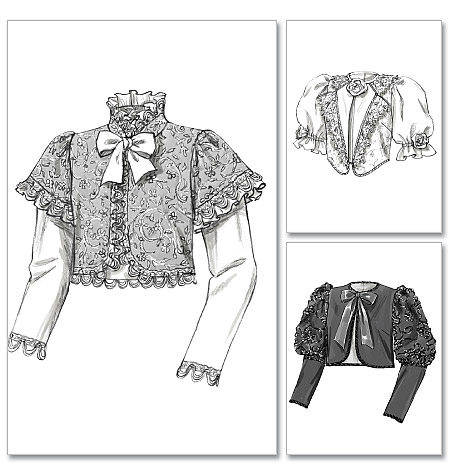 Except I decided I wanted the top right jacket, but with the bottom right sleeves.  But that shouldn’t be too hard.  Right?

Actually, it wasn’t.  Except for the part where I didn’t test the sleeve pattern before I cut it out.  So the upper sleeves could stand to be a little longer.  I do have extra fabric, so I can re-do that piece.  Later.

Here’s how the jacket turned out: 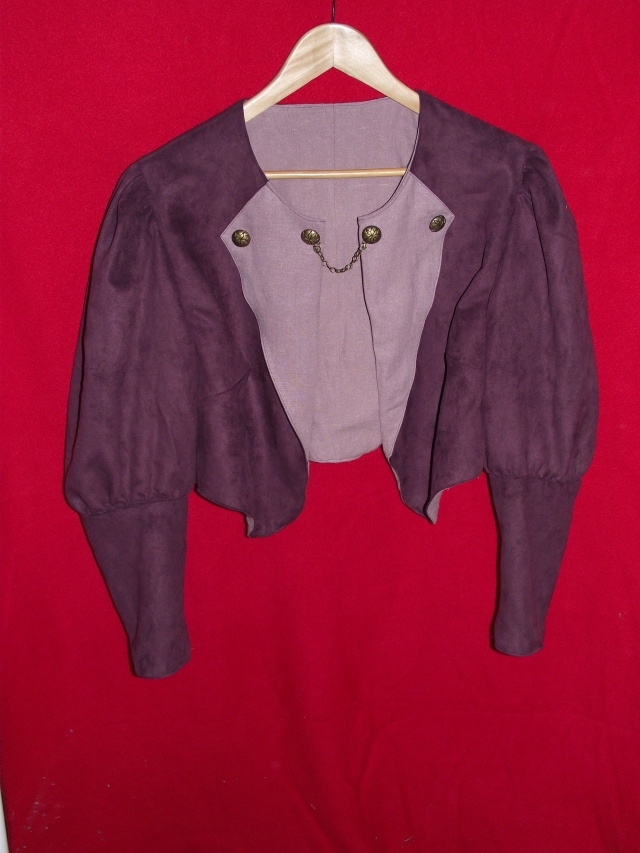 The outer fabric is a lovely purple doesuede; the lining is a mauve linen.  Both fabrics are very soft and comfortable.  And except for the sleeves, I’m pleased with how the jacket fits.

Next, I needed a skirt.  Now I’ve been making skirts for {mumbledy} years without patterns, so I decided I didn’t need one this time, either.  My goal was to make a gored skirt, so it wouldn’t be just a gathered rectangle (like so many of mine are).  And I wanted a deep, pleated ruffle at the bottom.  Because I’m in the middle of changing sizes at the moment, I cheated and went with an elastic waistband; when I hit a final size, I’ll go back and put in a more permanent waistband.

The skirt turned out a little snugger than planned, but it looks fabulous (as long as I’m standing up, which I mostly did for the photoshoot anyway).  Pinning in the pleats took forever; pressing them in took about that long, too. 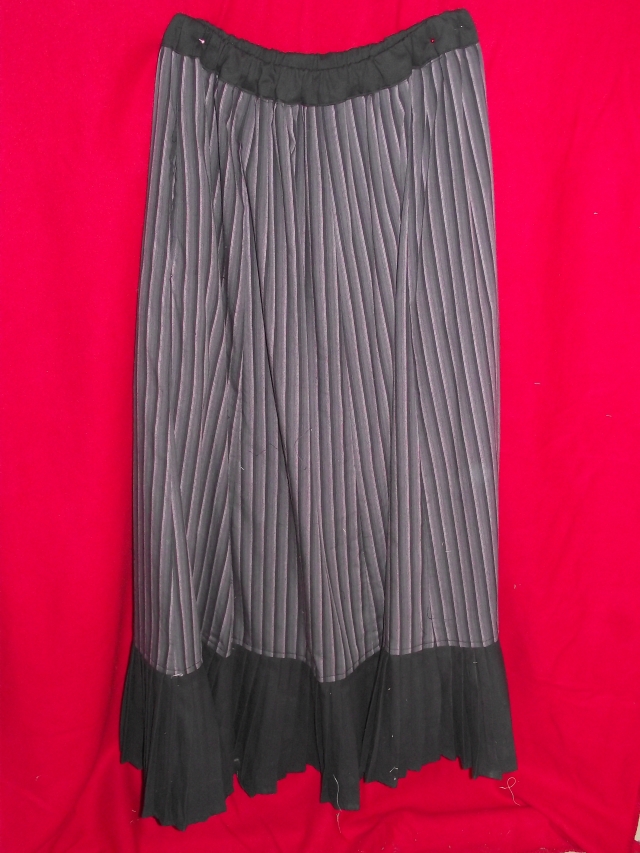 The main fabric for the skirt is a lightweight cotton; the ruffle is a slightly heavier cotton.

But since this was for a steampunk photoshoot, I decided to attempt an overbustle.  The logistics didn’t quite work out as I’d planned, so I ended up with more of a funky overskirt than an overbustle, but I think it worked. 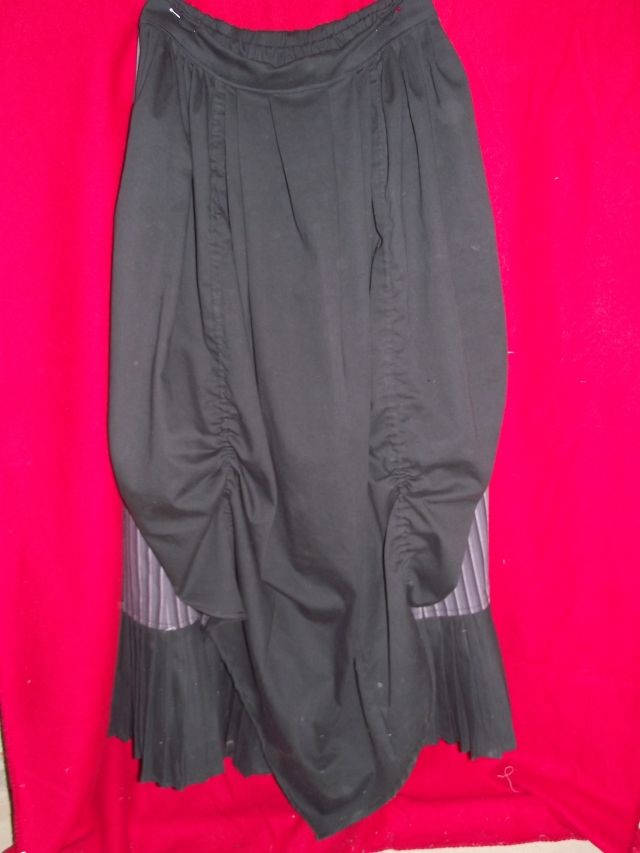 Last but not least, I needed a shirt of some kind to wear underneath it all.  I’d originally planned a long-sleeved, high-necked, frilly blouse–and that may get made up someday–but when the forecast predicted high temperatures of 100F or more for the day of the photoshoot, I decided on more of a camisole kind of approach.

For inspiration, I went out online and found pictures of some camisoles.  Like this one: 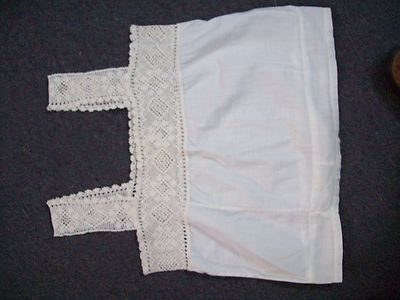 Based on that, I put this together: 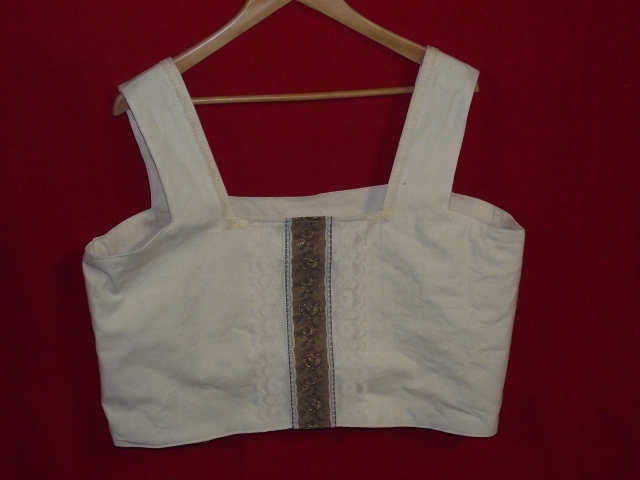 Which worked reasonably well, and fit very nicely for what’s basically a tube with shoulder straps.  Though I now understand the reason for the flared bit at the bottom of the original–I had a hard time keeping this one tucked into my skirt.  But I can fix that!

I talked about most of my accessories in my last Miscellaneous Monday entry, but I did work on a few more for the photoshoot.

I had a small gun that I’d purchased at WorldCon last summer.  But I thought it needed glitzing up just a tiny bit.  So I added a couple of small gears: 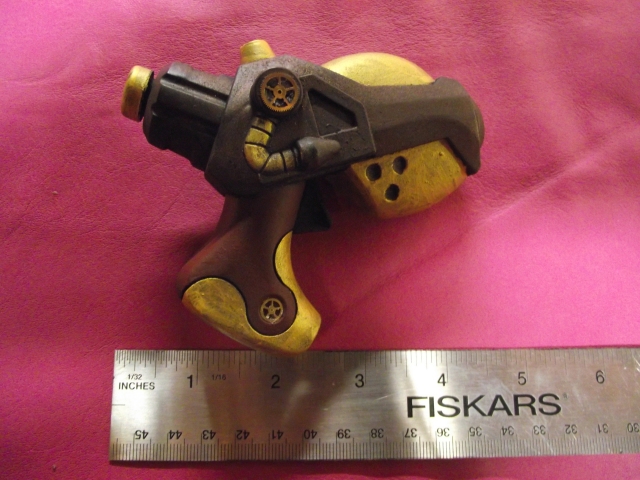 And then I made a quick and dirty holster for it: 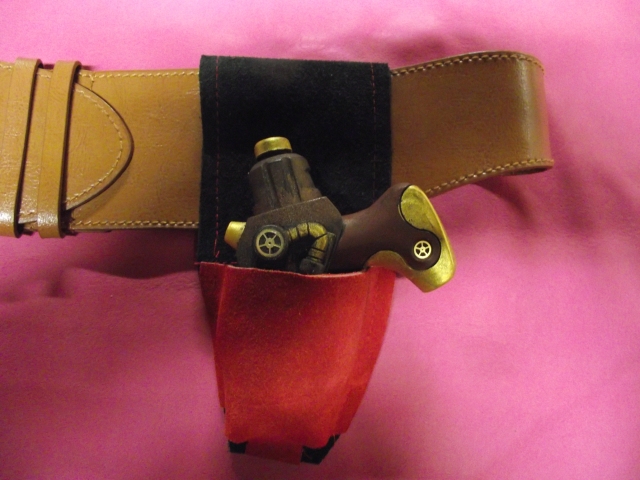 And hung it off of my belt. 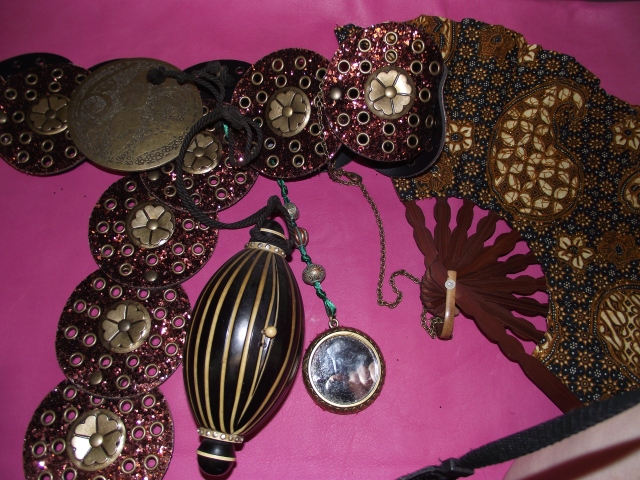 Along with my fan, mirror, and reticule.

I had a great hat my mom had given me (someone gave it to her, but she didn’t want it!!), and some nice black boots.  So I was pretty much all set.

Here’s what the final ensemble looked like all together: 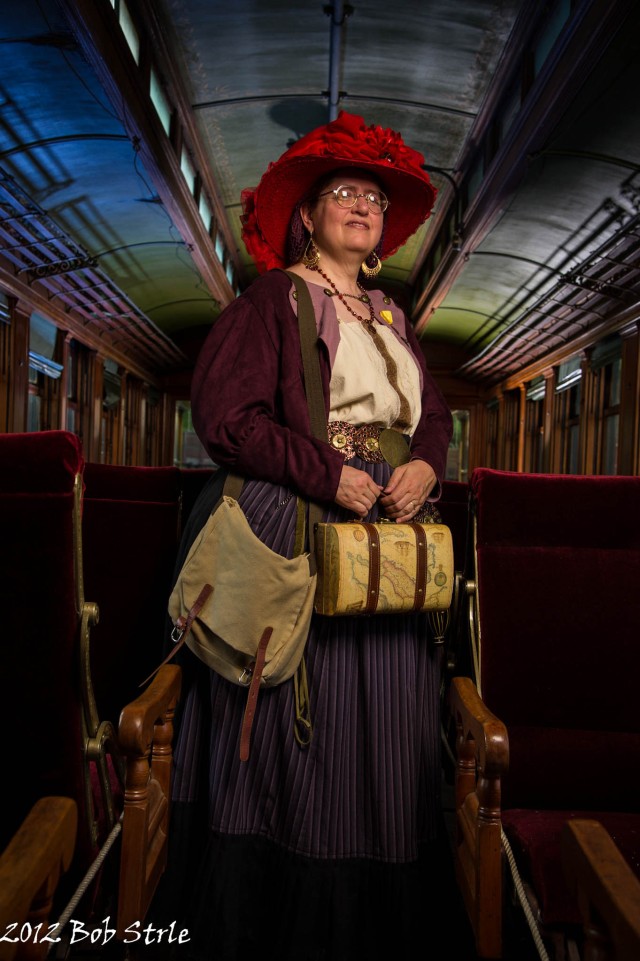 Or for a better view of the skirt: 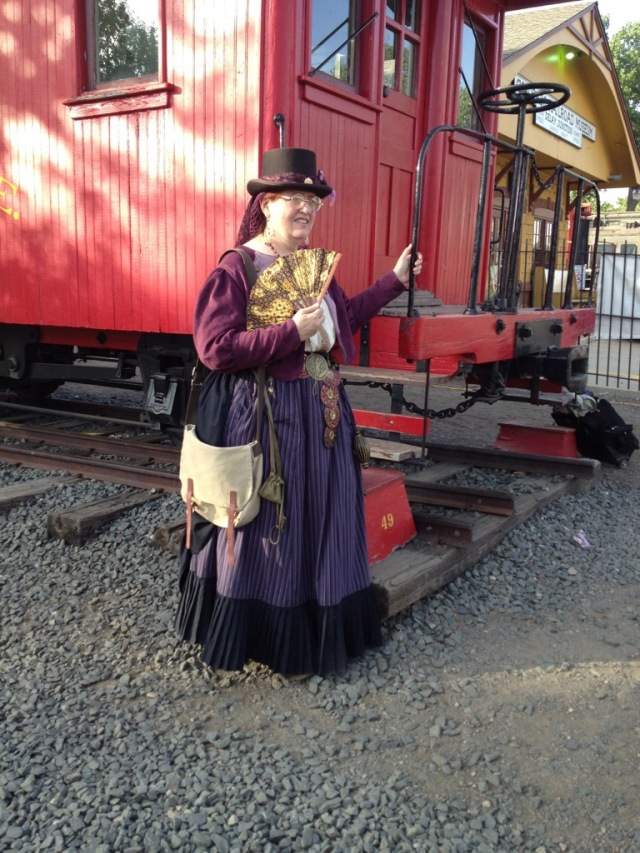 This shows off both the pleated ruffle and the overskirt.

And finally, a shot that shows off the belt accessories: 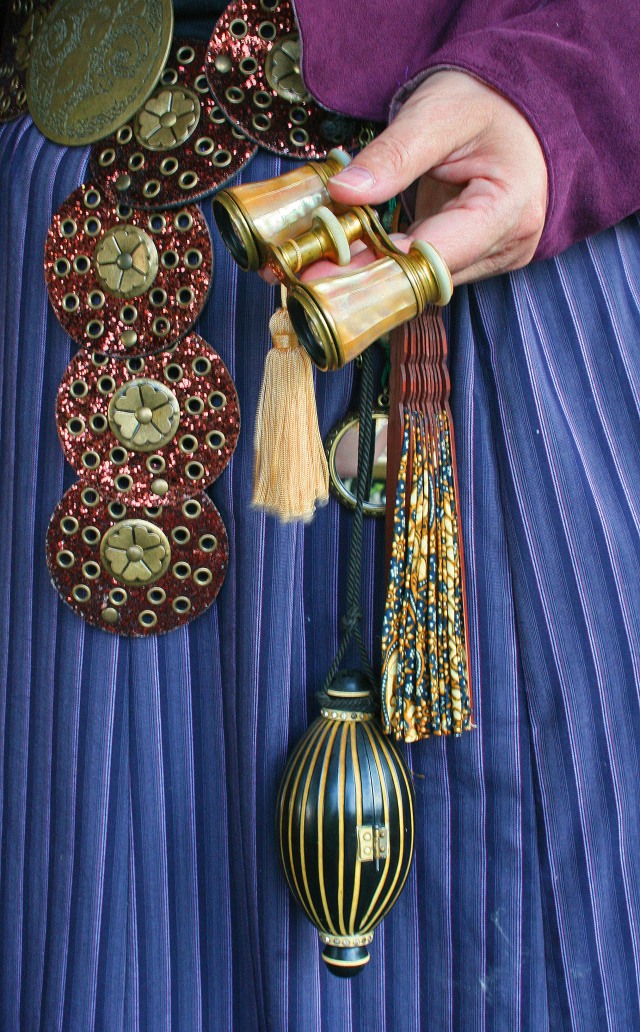 The opera glasses, alas, were merely on loan from the photographer.

(The rest of the pictures are available for viewing here.)

So that’s what I’ve been doing with myself for the past two weeks.

Aspiring author, sharing the tidbits I've learned along the way.
View all posts by sheilamcclune →
This entry was posted in Creativity and tagged costumes, sewing. Bookmark the permalink.