Posted on November 7, 2013 by sheilamcclune

Well, week 1 of NaNoWriMo has passed.  And I’ve made good progress; at the end of the first week, in order to keep on target, I should have written 11,669 words (that’s 1,667/day times seven days).  I’ve actually written 12,748, and I might squeeze in a few more before I go to sleep.  So I’m a little ahead of the game, which is good, because sometimes unexpected things come up.  Having a cushion can really save your backside in those situations (yes, pun intended).

In many ways, continuing a Work-In-Progress is a lot easier than starting a new story from scratch.  For one thing, since I spent all of last NaNoWriMo struggling to define this character and her voice, I can now just sit down at the keyboard and let her take over.  Or at least I try to; I have a tendency to be wordy, and she wants to be a touch more terse.  I keep trying to tell her that terse doesn’t build the word count, and we can edit later.  She conceded the point, but I can feel her glaring at me.

In some ways though, I’m finding it a little more difficult.  For starters, I keep having to go back and see how I worded something before, and which terms I used for things, and where certain scenes took place.  Plus, I’ve introduced some inconsistencies–for instance, I gave my main character an interesting faith to follow, one that involves extreme bodily modesty.  So when she’s out in public, she’ll want to have her head covered.  She won’t wear low-cut bodices or short sleeves or skirts that might show {gasp!} her ankles.  Of course, I now want to go back and edit out earlier references to her head not being covered or her neckline being too low, but I’m forcing myself to wait until next month to do that.  I figure by then, the beliefs will have penetrated her character thoroughly enough that the inconsistencies will stick out like sore thumbs (as my dad used to say).

As far as my pre-NaNo goals, I achieved most of them.  I did get my second computer monitor installed.  I did get my desk tidied, at least a bit.  And while I didn’t get them finished, I did at least get started on my maps.  Unfortunately, they’re on another computer at the moment.  So I guess I’ll save them for next week’s post.  Unless I decide to do a bonus posting over the weekend.

The other thing I did was to acquire a new writing buddy.  My Beloved Husband and I went to the Denver Zoo last weekend, and this little guy followed me home: 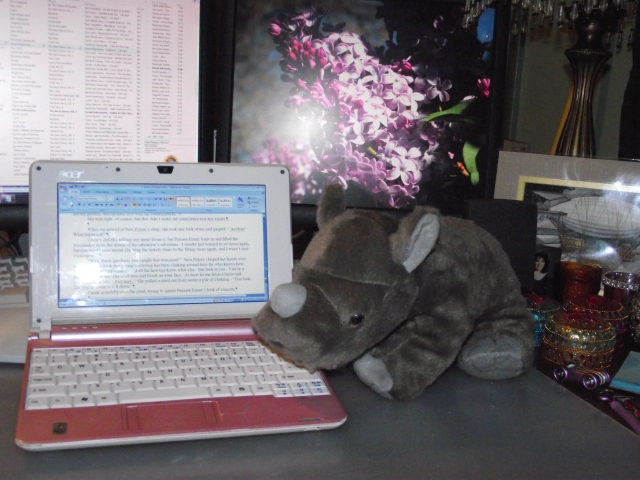 This is WriMo the Rhino, and he’s here to help me pile up the word count–and stomp out occasional fires [1].  (And as an added bonus, you can see my sorta-tidy desk and my second monitor in the background.)

So that’s how my NaNoWriMo is going.  Is anyone else out there taking part in this craziness?  If so, drop me a comment and let me know how your month is going!

[1] This is a reference to “The Gods Must Be Crazy”, a cute, quirky little film in which a rhino plays a minor part.  If you haven’t seen it, you really should.

Aspiring author, sharing the tidbits I've learned along the way.
View all posts by sheilamcclune →
This entry was posted in Writing and tagged NaNoWriMo. Bookmark the permalink.