It was bound to happen.

See, my friend Melanie gave me a bento box for Twelfth Night.  And so, sooner or later, it was inevitable that I would, in fact, commit bento.

Came home last Sunday night after a weekend of hanging with friends, watching movies, and noshing.  And I had some leftovers in hand: specifically, the remains of a meat and cheese tray, and of a veggie tray.

I set them down on the counter, in preparation for putting the meat and cheese into a smaller container for storage, and I caught sight of my bento box.  Hmm.  Okay.  Maybe it’s time to test the thing out.

My first attempt wasn’t very impressive.  It looked like this: 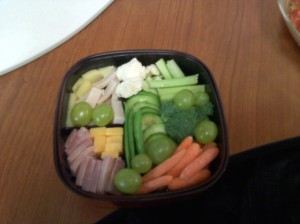 Now, for my first-ever attempt at filling a bento box, this wasn’t bad.  In the upper left, I put tiny slices of turkey and swiss cheese; in the lower left, ham and cheddar.  On the right, in the biggest compartment, I put julienne celery, cauliflower, snow peas, cucumber slices,  broccoli, and baby carrots, and then scattered in some grapes wherever they’d fit.  As bentos go, it wasn’t as attractive as it could have been, and as lunches go, well, it wasn’t very filling, either.

But I could do better, I knew I could.  And therefore, Day 2: 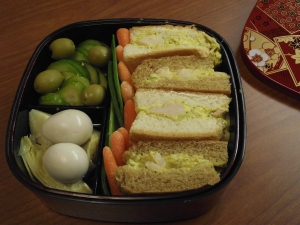 This time, in order to make the small amount of meat I had left go further, I shredded it finely and mixed it with finely minced celery and onions, and used some of the yogurt dip left over from the veggie platter to make a sandwich filling.  I sprinkled in a bit of curry powder, too.  Then I took two heels of bread (one white, one wheat), cut them in half, squared them off, and made two tiny sandwiches.  I cut each in half and put them in the big compartment.  I squeezed in some baby carrots and some snow peas for color.  Then I sliced up some of the cucumber chunks and marinated them in rice vinegar to which I added sesame seeds, a few drops of sesame oil, and a small amount of fish sauce.  Those went into the upper left compartment, along with a few green olives I found in the fridge.  In the lower left are two artichoke heart wedges, forming nests for two quail eggs.  (I pretty much always have a can or two of quail eggs around the house.  You never know when they’ll come in handy–served with a sauce of mustard, vinegar, and melted butter, they make an easy-but-impressive-looking appetizer.  You can buy them at your local oriental market.)

That was much better, both in terms of how it looked and how filling it was.  The only problem — and it was a minor one — was that using the yogurt-based dip as a binder for the sandwich filling made the bread a little soggy on the bottom.  I’m going to have to experiment with other binders to see if I can find one that’s more effective. 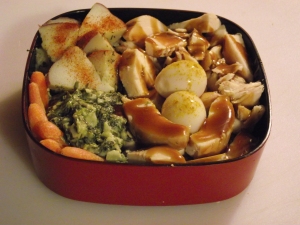 For Day 3, I had some Boston Market leftovers I wanted to use up.  So in the upper left corner, I diced three wedges of new potatoes, and sprinkled them with a little paprika for color.  In the lower left, I put some creamed spinach, with a decorative border of baby carrots.  In the big compartment on the right, I de-boned and diced the leftover chicken, drizzling half with a sesame ginger sauce, and half with a Thai peanut sauce, both of which I found in the fridge.  In the middle went two more of the quail eggs, this time sprinkled with a dash of curry powder. 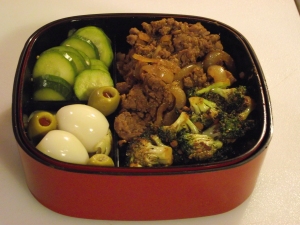 For Day 4 (which will be tomorrow’s lunch) I pretty much repeated the side dishes from Day 2, with the rest of the marinated cucumbers in the upper left, and quail eggs nested in artichokes in the lower left.  For the big container on the right, however, I decided to get a little fancier.  I had a little meat left over from making stew last week, so I thawed a bit of that, mixed up a marinade/sauce of ginger/garlic sauce, a little fish sauce, and some more garlic and ginger.  I also sliced up some of the onion left over from Tuesday’s sandwich filling, and stir-fried them together.  They smell heavenly.  Then I took some of the broccoli left over from the veggie tray, trimmed it down into dainty florets, and stir-fried that with just some garlic and ginger.  I laid it in next to the beef with onions.  Since it’s meant to be tomorrow’s lunch, I can’t tell you how it turned out yet, but it sure smells good!

So I’m obviously having fun with my new bento box.  I don’t know that I’ll necessarily use it every day, but it is a fun way to use up small leftover bits of things.

Anybody else have a bento box?  What do you put in yours?